I’m loving the new iteration of Fate, especially the Accelerated Edition (hereafter called FAE). But, there seems to be confusion in some corners about FAE stunts. So, I’m going to write up a break down of stunts. Hopefully this will help some people out.

Their are two types of stunts in FAE, the bonus stunt and the open-ended stunt.

Because I [describe some way that you are exceptional, have a cool bit of gear, or are otherwise awesome], once per game session I can [describe something cool you can do].

The first bracketed section “[describe some way that you are exceptional, have a cool bit of gear, or are otherwise awesome]” is simple. It’s nothing more than a bit of description or an evocative name. The second bracketed section “[describe something cool you can do]” is the tricky part. Most GMs won’t let you get away with having a death ray that allows you to kill everyone on the planet in a single action, but there are some game where that’s perfectly valid. These types of stunts offer such a wide variety of options that it really comes down to what your GM will let you get away with.

The bonus stunts come next, and are far easier to talk about. But, paradoxically, seem to also cause the most confusion. The formula to follow for bonus stunts is:

Because I [describe some way that you are exceptional, have a cool bit of gear, or are otherwise awesome], I get a +2 when I [pick one: Carefully, Cleverly, Flashily, Forcefully, Quickly, Sneakily] [pick one: attack, defend, create advantages, overcome] when [describe a circumstance].

Much longer and at times harder for new players to get a grasp on. I’ll shorten it for ease of use into this:

“Because I [cool stunt name], I get a +2 when I [pick an approach] [pick an action] when [describe a circumstance].”

Now, naming the stunt something cool can be hard, but it’s not vital to the mechanics. And since the “approach X action” dynamic is limited to 24 combinations (six approaches times four actions), there’s not much to worry about there. However, it’s that final bit of text, the “[describe a circumstance]” that seems to be the hang-up some players can’t get past.

The simplest way that I’ve seen for new players to overcome this obstacle is to directly tie the circumstance to the cool stunt name. For example, in a Star Wars FAE game some stunts might read:

“Because I [am Always Calm], I get a +2 when I [Carefully] [Create an Advantage] when [meditating].”

Or for a superheroes game a few choice stunts might read:

“Because I [have this Magic Ring], I get a +2 when I [Flashily] [Overcome] when [using constructs formed with my ring].”

Now I’m aware this is fairly basic advice for some gamers, but I’m a strong proponent for new gamers, especially younger gamers, entering the hobby. So if you think this quick post is simplistic, then it’s likely not meant for you.

I know this is old news but I’ve been avoiding posting about this because I was honestly crushed by the announcement that MHR was no more. It was a great game and it was a hell of a lot of fun to play.

So a hearty thank you to Cam, Jack, and all the rest who managed to create such an enjoyable game. What bummer.

I know some people don’t think MHR needs a dedicated trait for Intellect, but I disagree. It’s such a staple of the superhero genre that to leave it out is… problematic at best.

So, here’s a quick write-up for Intellect in MHR.

And to celebrate the new-found intelligence in MHR, I’ll be writing up some datafiles for DC characters who explicitly need an Intellect trait to represent their big brains. Starting with Brainiac 5 from the Legion of Super-Heroes.

Just a quickly noodled out character creation schema. Some people really like to have balance and rough parity between the characters so I threw this together. I would prefer a system like this as it’s simpler to handle than the fully fleshed out xp point buy systems I’ve seen. It also feels like something that could have been accidentally left out of the game itself rather than tacked on after the fact, which is a bonus for me.

I’m not writing this post to somehow pretend that I’m an expert at running MHR. I’m certainly not. But, there are a lot of people who have questions and are not sure about how things work, how they should work, and how they can be stretched to work. These posts are meant to help new Watchers figure out some of the pitfalls to running MHR compared to other, more traditional, RPGs.

My first attempt at writing a rough guide to being the Watcher for the Marvel Heroic RPG.

Rogue is one of those amazing characters in Marvel Comics. She’s evolved over the years and grown in ways that are unimaginable for other characters. Through the years her powers may have fluctuated, but the core of the character has remained consistent. Rogue is a scared Southern Belle who’s afraid of her powers. She is a wonderfully tragic character with a lot of role-playing potential.

Here for your enjoyment, one possible version of Rogue for the Marvel Heroic RPG.

Okay, so I’m a big superhero cartoon geek, big surprise, I know. And one of my favorite DC characters of all time is Green Lantern. I gotta admit I wasn’t that hot on John Stewart until the Justice League cartoon, but once that hit… I was sold.

So, for your gaming pleasure here is an amalgam of the cartoon and comic book Green Lantern, John Stewart, for use with the Marvel Heroic RPG. 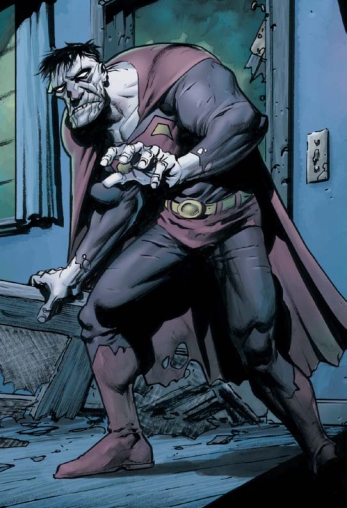 It am Friday two-fer. Me am not Bizarro. Me am just bizarre.

Bizarro! The Best Super-Friend Superman Ever Had.

Patrick “Eel” O’Brian was a petty criminal who, through a twist of fate, gained unimaginable power! A power so vast, so unstoppable, that even the wimps at the Justice League cried for mercy.

It’s really hard not to go overboard with a character this goofy and still powerful.

The Ever Lovin’ Plas.

Sean Cassidy is–to me–one of those mainstay characters who, while not my favorite, is definitely near the top of the list. Presented here is a Marvel Heroic RPG datafile for Banshee, set right around the time of Generation X. There are four Distinctions listed along with three milestones. Select from these depending on how you want to characterize Banshee.